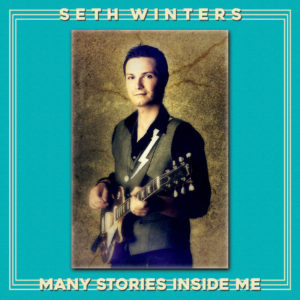 Seth Winters has just released his brand new album Many Stories Inside Me. It is a wide mix of varying original material. The opening track Cassidy is a country song, where the album also has harder heavier edged darker songs such as Crazy Man Sane and Orange County in the 80’s. Many Stories Inside Me is a timeline of Seth’s personal experiences mixed with his trademark guitar virtuosity, strong songwriting and spot on vocals. The album’s influences can also easily be easily spotted without crossing into copying too much territory. The opening track Cassidy reminds one of a young Dickey Betts, while Crazy Man Sane has a Gov’t Mule-type vibe. The album’s strongest guitar solo comes towards the end of track 2 – The World Don’t Run on Love – while there are also lots of guitar trading fireworks with Zack Feinberg, the guitarist from The Revivalists, on Crazy Man Sane. Radar Screen track 6 can hear influences from Prince’s When Doves Cry while also charting an original path. Many Stories Inside Me is a diverse range of strong songs, vocals and guitar work. Pick up your copy today at iTunes, Amazon, or stream it on Spotify.